Share:
Flush mount lighting has been around a long time. In fact, the style was a very popular one during the 1920s, when lighting was designed so the garish light bulb itself would never be seen. 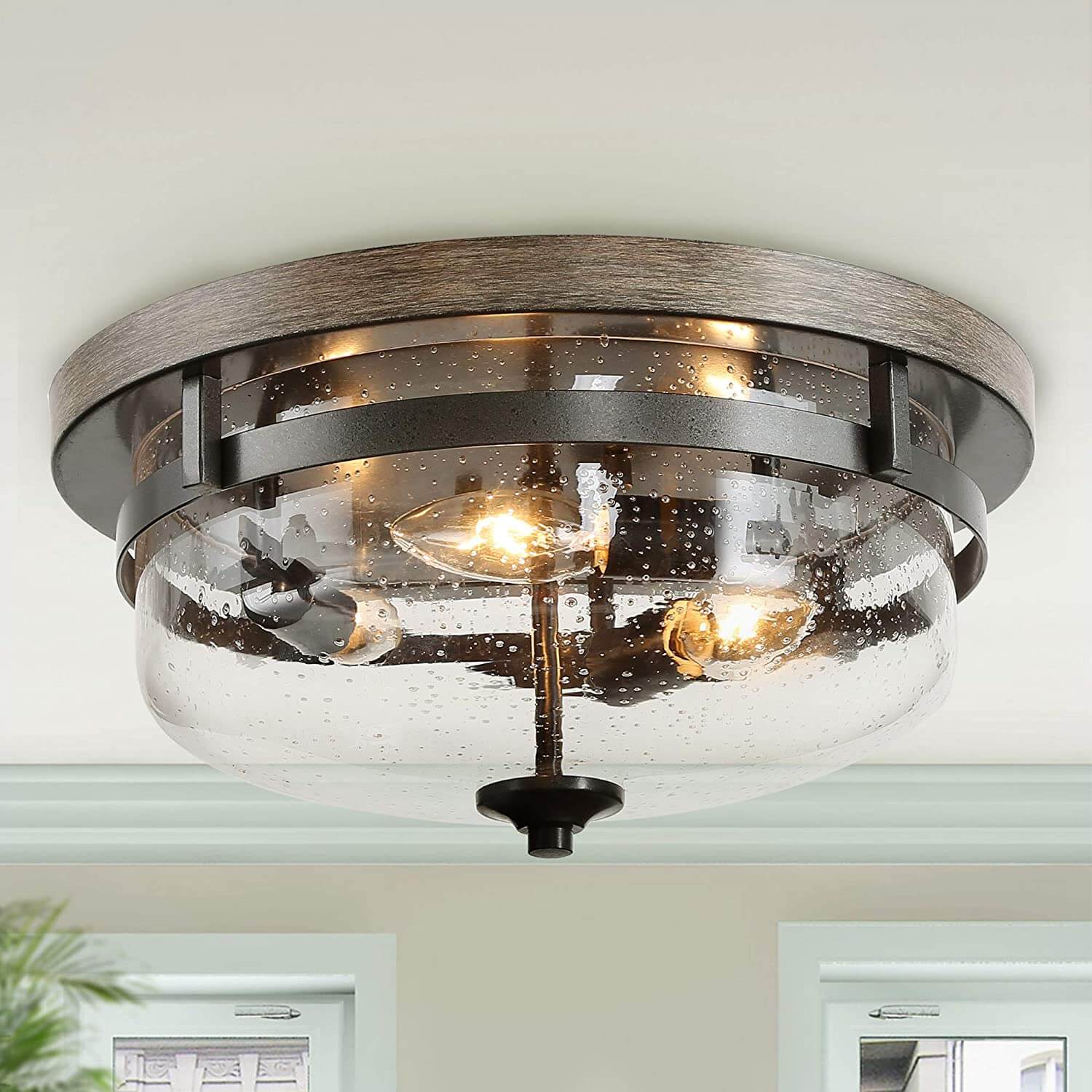 As a result, the bulb was typically encased with a far more eye-pleasing container that both softened the harsh bulb's light as well as made it impossible to see the source from any angle.

No surprise, flush mount lighting was regularly used as the main room lighting from the ceiling, often centered in the middle of the ceiling and bright enough to lighten up the entire room without shocking anyone.

Shape-wise, the flush mount lighting system is unique and easy to spot. It’s essentially a half-dome or similar shape that has no break until the half hemisphere makes contact with the ceiling, i.e. a half circle. The actual bulb mechanism is contained inside the cover which is secured by a central rod that extends from the ceiling down. The cover is then placed onto the rod, covers the bulbs, and stays in place instead of dropping with a simple screw and nut locking feature in the center.

Being decorative in design, no one ever notices the locking mechanism as it usually has a custom shape providing a decorative tip to the bottom of the lighting dome.

Alternatively, there are semi-flush mount lighting designs as well. These are different in that the supporting rod from the ceiling extends down. The dome cover does not extend all the way to the ceiling surface above, and there is a gap where the supporting rod can be seen between the ceiling and the lamp apparatus itself. These designs offer a slightly lower lighting level and a different style and look. However, even with the semi-flush style, the bulbs cannot be seen unless the dome cover is removed from the bottom.

Selecting the right type of flush mount lighting for a room is easier than most people think. That’s because the lamp style comes in so many different sizes, shapes and designs, there’s a choice for every room and décor. Simply changing out the light bulb also has a dramatic effect on the lamp itself, creating a mood-inducing low light feel or with a higher wattage and brighter room.

Because they come in different sizes, flush mount lamps can be placed in a variety of rooms as well. Smaller units provide a nice style difference in hallways and bathrooms. Bedrooms, studies, family rooms and offices can handle larger size units, again with different degrees of lighting intensity via the bulb choice. Home libraries and entertainment rooms are perfect for flush mount lighting, especially with lower intensity light settings or lighting with unique coloring versus just stock white light.

This model is the classic approach that has the oldest history in lighting design. Essentially, as described above, the dome covers the entire light and meets the ceiling with a bordered trim. Round and wide, like a half ball or egg situated in the ceiling, the entire assembly is held in place by the central rod which is secured by a decorative center point piece that adds to the décor of the lamp.

Oftentimes the dome is glass or clear porcelain with a frosted look, softening the bulb lighting significantly and adding to the stylish look of the lamp itself. It’s frequently a choice for rooms with convergence and multiple chair settings, providing wide but soft light for a group versus a singular user. Many home owners try to match the lamp style with the furniture, walls and drape styles for a complete look and setting in the room as a whole.

Likely generated in the 1950s and 1960s when furniture designers were experimenting with combining different materials in new ways, the Fabric version of the light essentially replaces the glass dome with a tightly-stretch fabric cover, similar to what is used on a table lampshade.

The approach softens the light, but the shape tends to be more cylindrical in application, ergo a Bauhaus or minimalist style look versus the classic art deco style glass usually produced. The style is fairly European in approach is often matched with similar Ikea-type furniture for a modernist Euro look to a bedroom or living room.

Another in the classic category, the crystal-dome style is a type of flush mount lighting regularly seen in main sitting rooms, small dining rooms, and guest receiving rooms. It’s not a choice one puts in the hallways or entry foyer, but it would be an interesting choice in the bedroom for a vintage classic look, assuming the rest of the furniture matches as well.

Essentially, what would otherwise have been the glass dome is replaced by a network grid of crystal glass pieces, all tied together at the center by the central point piece that keeps the dome attached to the ceiling. It’s a very interesting and different look, especially with how the internal light bounces off the crystals and lights them up.

The choice will also produce a much brighter light for a room than the shaded glass dome or fabric dome choices. For many folks, the crystal dome style is a perfect substitute for a room that would otherwise have a chandelier central light hanging from the ceiling.

Another experiment from the 1960s, this style takes the shape of the fabric cylinder and installed it with a decorative motif on the outside that displays with a pattern when lit up. The style is very different from typical lighting and, as a result, not a common choice everyone picks. Depending how the interior design is put together, this choice could work with ultra-modern room looks as well as throwbacks to a minimalist approach.

Think “big hunting lodges in the alpine forest” and “a roaring fireplace while sitting in big chairs” and your feet placed on sizable fur rugs on the thick wood flooring. That’s the feeling the themed flush mount light choice often gives people. Not a selection for every room, these flush mount lamps tend to have a motif, often wilderness and hunting related, set against a beige background and framed in a dark bronze bordering. Some come in round shapes but many of these lamps tend to be angular in shape, either as squares or octagons.

Like all flush mount lamps, the themed lamps connect to the ceiling with a hidden central rod and a center piece nut that holds the lamp up and secure against gravity. Many times, the themed lamp is a common choice for vacation homes in the mountains, alpine resorts, mountain hotels, and cabins.

Very much a deviation from the typical style, the three light design keeps the mount seamless with the ceiling, but the actual bulbs are individualized in their own rods and bulb holders. The big advantage of this lamp choice is that each of the bulbs can be aimed, and many styles still come with individual covers to soften the light emitted.

A very modern style, this lamp choice won’t fit in every room, but it will definitely be a stand out in a room or sitting area that is designed to be unique. The style is rare and hardly ever seen in consumer stores, which tend to opt for the more traditional flush mount lighting noted above.

This style comes in a variety of sizes, often smaller as the flush mount lighting for this style was regularly used for tighter boat rooms and hallways in vessels. The light styles generally include a dome for the bulb and a cage for the dome to protect it from bumps. The style can be installed high on the hallway walls or on the ceiling. Most folks in homes install smaller diameter units in hallways, bathrooms, stairways and similar.

The Boat style lamp isn’t usually a choice for larger bedrooms and may seem a bit overly-masculine in appearance versus the rest of a home style. Units can be had in rounds, squares, oblong shapes and similar.

Light Bulbs and Their Impact

Discussed above, light bulb choices will have an impact on how a flush mount lamp works for a given room, especially given the intensity of the bulb and the shading of the dome around it. However, the light bulb world has become a lot more complicated. One has to make choices between light emitting diodes (LEDs) versus compact fluorescent style bulbs (CFLs). Both reduce energy consumption, but one may find they are also very weak and can’t penetrate the flush mount dome cover very well.

This may end up requiring a buyer to experiment a bit with different bulbs for a given room to find the right mix, wattage, lamp style and lighting for the room in question. In short, most folks probably won’t start off with the right bulb right out of the gate and may need work towards the custom solution that works best for them.

A good number of flush mount lamps are available in vintage selections, offering many styles that no longer exist among new product choices. Keep in mind, however, if you need more than one or two units, finding matching sets could be a bit of a treasure hunt.

Many flush mount lamp buyers tend to buy units that are specific to the room itself, creating variation within a home as one transitions from an entrance to a family room to a hallway and then a bedroom or similar. This avoids the problem with vintage choices of trying to find enough of them that work, and it allows each room to be developed with its own style and look versus an all-encompassing singular house style.

Of course, going new avoids the vintage inventory availability problem altogether. One could simply order sufficient numbers of the current models available through most stores, or find more unique items through online ordering and special design providers. This gives you the advantage of a lamp with wiring that is up to date with current standards, avoiding any costs for rewiring, which can be a problem with vintage lamps.

Again, flush mount lighting has a lot of versatility to work with different room styles, and it provides a very different look from the standard hanging ceiling light approach. Folks will realize they know more about these lamps than at first blush, often due to realizing they've been places with flush mount lighting such as old hotels, older relatives' homes and similar in the past.

The choice is a great one for a classic look as well as an alternative ceiling lighting, and it makes hallways pop with additional lighting versus bland standard illumination.

Just get creative and try one out in a given room. You might be surprised how much you like the style.